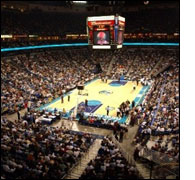 Attending my first Hornets’ game at the Arena in New Orleans in January, I was shocked that a religious invocation was given before the games. The strange ritual takes place just before the playing of the national anthem. The lights go down, a minister walks to the middle of the court, and everyone is asked to stand and pray. The minister asks God to protect the players and the fans.

There has been some controversy about this practice in New Orleans but it usually centers on the exclusion of Jews, Muslims, and members of other religious sects from the ritual. That’s misplaced criticism.

Public prayer of any kind always seems out of place. I can see a moment of silence for personal, nonreligious reflection at various times—the death of a member of the team’s organization, for instance, or victims of a war or natural disaster. But routinely imposing a religious ritual on paying (and in my case, unsuspecting and unwanting) fans is discriminatory and in very bad taste.

This odd practice started by former owner George Shinn who decided to impose his religious views on fans. Shame be upon him.

If you think about it, singing the national anthem before a sporting event is also very odd and unnecessary. But that’s a tradition that is shared around the league and in every sport. It’s slightly less offensive to be cajoled into a ritual of blind patriotism than to be forced to “communicate” with an invisible man behind a curtain.