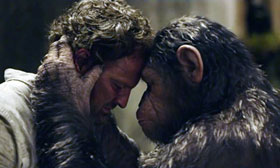 The Apes Are Back!

The blockbuster film Dawn of the Planet of the Apes continues the brilliant story begun in Rise of the Planet of the Apes in 2011. In the earlier film, a chimpanzee named Caesar leads a revolution of apes kept in cages and abused as experimental subjects. In the pivotal scene, Caesar stands up to his human captors and says, “No!” The apes escape to Muir Woods, a beautiful, expansive state park north of San Francisco, where he announces, “Caesar is home.” Caesar and his mates stake out a permanent homestead in the northern California woodlands.

Dawn of the Planet of the Apes — which should be seen in 3D if possible—further explores the relationship between apes and humans. When the humans invade the apes’ territory, a war ensues.

The movie explores the close biological and cultural links other great apes share with us. The apes in the movie have observable individual differences in appearance and personality. They form hierarchical communities and follow strong leaders. They form friendships and empathize with each other. Subgroups that have competing motivations develop within the social groups. They organize themselves and make plans. They are capable of communicating and bonding with individuals of other species.

The power of communication drives ape behavior in both movies. We know chimpanzees have significant communication skills. They use vocal and nonverbal forms of communication to represent a range of thoughts and feelings. So far they have not vocalized anything close to what we consider language, but both these films portray a world where that could happen.

Why not? Like common chimpanzees, bonobos, orangutans, gorillas, and gibbons, we are apes too. And like other apes, we use communication to form and maintain our communities, thereby increasing our chances to survive and reproduce. Effective communication is key to the evolution of all advanced species.

We humans like to think we are special. Indeed, we are the most advanced life form on earth and the only one capable of incredible feats (but also the only one capable of mass killing and genocide). These two films—especially The Dawn of the Planet of the Apes—confront the conflicting realities all apes face. These films reveal just how similar our species are. That’s a lesson everyone, especially the American public—so famous for its ignorance about evolution—can use.

Anyone seeking to learn more about humans’ close connection to the other apes should read Jared Diamond’s classic book, The Third Chimpanzee. An inexpensive paperback edition is available on amazon.com