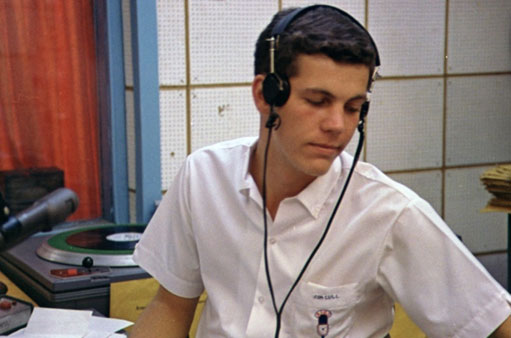 We were so young. We were told we had to stop communist governments from taking over all of Asia by defeating them in what was then South Vietnam. China supported the communist North Vietnamese government. The United States supported the capitalist South.

I spent the second half of my tour of duty in a much safer role as a rock and roll deejay at Armed Forces Radio in Saigon. This was the same time period depicted in Robin Williams’ film, Good Morning, Vietnam! I was the overnight deejay working from midnight to 6am. The person that Williams’ character was based on, Ade Kronauer, was on the air from 6-10am.

While I was stationed in Saigon I took the opportunity to read up on Vietnamese history. I learned about the French occupation of Vietnam and the valiant fight to kick them out. I began to think that the American role there was not that much different. The more I read, the more alarmed I became. My time in Vietnam as a 20 year old kid gave me a whole new perspective on American foreign policy.

My own personal politics were being formed too. Why were so many young men and women being killed in Southeast Asia?

Fortunately for me (but not for 58,220 other American military personnel) I came home alive. I’ve traveled the world over the past 50 years but never went back to Vietnam—until 2015.

The photo below on the left was taken through the window of the United Airlines charter plane that brought me back to the United States when my tour of duty was over in 1966. I shipped out that July morning from Tan Son Nhut airport. On the right is the view I had of Tan Son Nhut when arriving in Saigon in July—49 years later!

To continue with the retrospective, let’s go back to November 2, 1963—less than two years before I arrived in Vietnam. South Vietnamese president Ngo Dinh Diem was assassinated that day by his own generals from the South Vietnamese Army. The assassination had been approved by the American government.

The building pictured below was supposed to be Diem’s new presidential palace. It was finished in 1966, just a few months after I took the top photo. The man who succeeded Diem into office as President of South Vietnam, Nguyen Van Thieu, moved into the building as his home and the seat of the government.

The Americans finally left and the South Vietnamese government surrendered to the North in 1975. Communist troops broke through the gate surrounding the palace and took over the building. Today the building is called the “Reunification Palace.” In the second photo I am looking at the same building from the same angle 49 years later. The flag of communist Vietnam now flies from the roof.

Not far from the Reunification Palace is the War Remnants Museum where Vietnam’s communist government presents their side of the Vietnam War in a very graphic way.

The experience begins by viewing captured American equipment and weapons.

For many reasons it is extremely difficult for American veterans of the Vietnam War to visit this tourist site. The Reunification Palace and the War Remnants Museum are populated mainly by Europeans. As I mingled among them, I wondered what they would think of me if they knew I am a combat veteran of the “War of Aggression” as the Vietnamese government (not incorrectly) puts it.

The poisonous legacy of Agent Orange lives on. Hundreds of thousands of American veterans and Vietnamese citizens today suffer from serious health problems that were caused by exposure to Agent Orange, a chemical that was sprayed by the United States military to “deforest” parts of the country.

Why were the Americans in Vietnam?

The claim that the Americans like me were fighting communism on behalf of the Vietnamese people is partly true. If you talk to Vietnamese people who live in the south part of the country—or the Vietnamese ex-patriots who live in California and elsewhere—they will assure you that the war was fought to protect their freedom. They still appreciate us. But of course the main reason our government was there was to maintain our global hegemony—control over international commerce and political ideology. We were locked into a Cold War with Russia and China at the time. Vietnam was the place where the American government took a stand.

But there is another part of the story of the Vietnam War that rarely gets explained. The main reason that President Ngo Dinh Diem was assassinated by his own troops in 1963 is because he was perceived as trying to turn Vietnam into a Catholic nation.

French colonial powers did their best to instill Catholicism into Vietnamese culture. The French invaded Vietnam, Laos, and Cambodia in the 1870s and stayed there until forced out in 1954, just a few years before the American “advisors” arrived. Diem’s family had been converted; as president he was essentially a Catholic missionary. When the attack on his palace took place in 1963 he escaped by underground passage to a Catholic church. He was killed by his own military after he surrendered and left the church. Many of his own citizens were glad to see him gone.

Why was he killed? Wrong religion.

Vietnam may be communist politically but spiritually it is Buddhist. Even now the communist government knows better than to try to get rid of Buddhism. Buddhas can be found everywhere, including this fellow perched high in the hills on the outskirts of DaNang.

Located in the middle of the country along the coast, Hue is the former imperial capital of Vietnam and a popular tourist site now. Visitors there learn the story of a Buddhist monk who in June of 1963, just five months before Diem’s assassination, drove this car from an outlying province into the city of Saigon.

He got out of the car, sat in the middle of the street, doused himself with gasoline, and set himself on fire. By self-immolation the monk was protesting blatant discrimination against Buddhists by the Catholic government. As modern religious mythology of the event has it, the heart of the Buddhist cleric kept beating for years after he was pronounced dead.

My visit to Hanoi, Da Nang, Hue, Hoi An, and Saigon this summer brought memories rushing back in my mind. It’s not easy for many Vietnam veterans to go back to Vietnam. Going back did help me come full circle in terms of my own feelings. But one part of the experience continues to bother me.

The religious discord and violence that destabilized South Vietnam—the country we were fighting and dying for—is almost never discussed as part of the sad legacy of the Vietnam War.

The hidden conflict of Vietnam was religious tribalism and intolerance. What were the consequences of not understanding this?

Except that George Bush didn’t know the difference between Sunni and Shia Muslims.

The steep price of another “lesson” not learned from the Vietnam War.