Not of this World?

This symbol represents the “Not of this World” subculture of religious fanatics who take it upon themselves to announce to commoners like us they are just a bit too good for life on Earth. They’re going to heaven and you probably aren’t.

Meanwhile, many of the rest of us poor souls are doing our best to make things better right here “In this World.” You know, the actual world. Not some misguided fantasy of a desperate imagination.

Inspiration for the NOTW evangelical movement comes from a bible verse—the Book of John, Chapter 18, Verse 36: Jesus said, “My kingdom is not of this world. If it were, my servants would fight to prevent my arrest by the Jews. But now my kingdom is from another place.”

The fundamental idea behind the radical NOTW subculture is that life on Earth is so crass, so unchristian, so secular, so heathen, that NOTWers have to tolerate life here until that joyful moment—death—arrives so they can ascend to their make-believe kingdom in the sky.

But in the meantime, NOTWers can purchase the Christian rock band Petra’s recording of the song by that title, and buy tons of NOTW logo clothing, posters, and car decals that announce to the world: I am Not of this World, suckers!!

Not of this world? What keeps you from leaving? 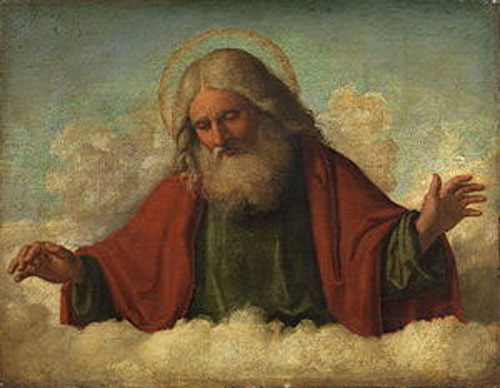 The Greatest Story Ever Told

A belief system becomes influential when it is communicated persuasively to others. In the case of religious communication, grand narratives passed from generation to generation turn the abstract God into particular beliefs and cultural practices that bridge the gap from fantasy to reality. The stories and characters give coherence, color, intrigue, and legitimacy to the confusing and often implausible historical events that make up the core claims and tenets of religious belief.

Most religious narratives begin with an inspirational protagonist. For committed Christians, a beautiful story is told of a humble carpenter, born of a virgin , sent by God to save the world, who performed miracles, died on a cross, and ascended triumphantly to heaven. Devout Muslims are charmed by the legend of an illiterate and ordinary man who was chosen by God to receive the final and true revelation and establish, by physical force if necessary, the rightful place on Earth for followers of the morally superior faith. Both stories inspire hope through the appeal of creationist fantasies, miracles, selfless prophets, a loving personal god, and the promise of everlasting life.

The various creationist and “birth of humanity” tales expressed in religious mythology are deeply ethnocentric. The details that are described reflect the cultural worlds that existed where and when the stories were fabricated. The Garden of Eden, for instance, is a clear projection of what an agricultural society might have dreamed up two thousand years ago. The fables are beautiful and magnetic. Believers sign on to their particular projects even though the stories—like the claim about the origin of the Earth accepted by the Abrahamic faiths—are provably false. Same for a sacred Chinese legend that contends God Pan Gu floated for 18,000 years through a cosmic black egg until he smashed it open, created the universe, and separated heaven from Earth—a fantasy that fueled Chinese ethnic identity for generations. Members of North America’s Havasupai tribe are still taught that Arizona’s Grand Canyon is the birthplace of all humanity despite genetic ancestry evidence that of course completely obliterates the claim.

It’s difficult for nature’s honest narrators to compete with the supernaturalists’ seductive folklore, reckless promises, and the claim that a kindly Creator lovingly made all that is beautiful in the world. Unvarnished nature—spectacular as it is—doesn’t offer the same psychological assurances, super heroes, parables, holidays, or promises of immortality.

But the truthfulness of the stories we tell ourselves and others matters. The magnificent history of life on our planet—a verifiable narrative based on scientific discovery, evidence, and reason—is the greatest story ever told. Understanding the basic principles and processes that explain how the countless life forms that surround us became what they are, and realizing our place among them, is not only enlightening, it is truly comforting. No need for self-deception. No need to teeter on the brink of heaven or hell. No reason to judge, and even hate and kill, others because they belong to the wrong religious tribe. No reason to do good acts in order to “please God,” but instead because it is the morally right thing to do for our common humanity and individual communities.

For many people, God represents power. That’s why people ask God to do them favors. But our great advantage as conscious beings comes from appreciating the transformative power of the natural processes. All living things have been adapting to changing environments since life on Earth began more than three billion years ago. That’s how we all got here. And that’s the greatest story ever told. Beautiful. Honest. True.