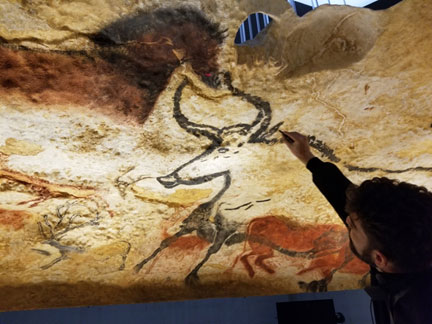 Cave Art – Earliest Symbolic Communication Our ancestors immigrated to Europe from Africa more than 50,000 years ago. They created some of our species’ earliest symbolic art on the walls of caves throughout the continent. Much of that remarkable art was discovered on the walls of caves deep in the Lascaux hill of southwestern France in 1940. In order to preserve the art, today only a small number the most qualified specialists get in the caves to do research. But a lifelike replica of the main arteries of the cave has been constructed by the French government on the site and is open to the public. As a guest on a National Geographic Expeditions tour, I visited there recently.

Modern architectural design follows the contour of the hillside where the extensive cave was discovered by four curious teenage boys exploring the woodlands in 1940.

The reconstructed site shows the kinds of images that were painted, explains their meaning, and exhibits the tools that were used to render the artwork. The ancient artists worked in the dark or with only a low level source of illumination.

An expedition specialist points out recurring themes in the art, known to have been painted between 19,000-24,000 years ago.

Human representations are extremely rare. This is The Man with A Bird’s Head. The drawing is schematic. The arms open wide with the four fingers spread out. Genitalia is pronounced. The upper part was produced with a brush and the bottom part was sprayed.

We also visited Atapuerca, Spain, where the oldest known hominin fossil remains in Europe have been unearthed. A Spanish graduate student who has been studying and working at Atapuerca for several years describes how they identify and date the various hominin species at the site.

Chris Stringer-Research Leader in Human Origins at the Natural History Museum in London-was tour leader. Chris’ book, The Complete World of Human Evolution and his earlier work on Neanderthal evolution has been very useful in my own research and writing.