Middle of the World?

Imagine what it feels like to straddle the equator—one foot planted in the northern hemisphere, the other foot set firmly in the south. You can do just that by visiting La Mitad del Mundo (The Middle of the World) just outside Quito, Ecuador.

Problem is, you’ll have to make a side trip if you want to find the real equator.

Between 1979 and 1982 an impressive monument and ethnographic museum was constructed to mark the exact location of the equator. A “Middle of the World City” with retail shops, restaurants, and a big stage for entertainment grew up around the monument. Hundreds of thousands of tourists continue to swarm the site, many opting to have their photos taken—one foot in the north, one in the south. 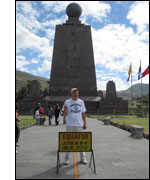 Unfortunately, those tourists have both feet planted in the southern hemisphere. With the advent of GPS technology, the actual equator exists 240 meters to the north of the monument and line that claims to mark the location of the equator.

During a recent visit to Ecuador—a truly wonderful place—I took the opportunity to visit both sites. 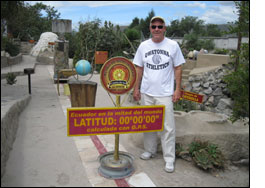 Just a handful of tourists visit the more precise location of the equator to the north of the main tourist site. Here you get a greater sense that you really are visiting the “middle of the earth” because GPS technology can make much more accurate measurements. It was rather thrilling to be there. The actual Middle of the Earth has become quite a tourist attraction too, though the number of visitors who go there is far fewer. As the photos below show, a tour guide challenges visitors to try to walk straight along the equator and to balance an egg. Water supposedly drains one way a few feet to the north of the equator and it goes the other way down the drain a few feet to the south. These kinds of tricks and illusions are designed to “prove” that this is the real equator—an attempt to draw tourist dollars away from the big attraction up the road.

The two tourist sites tell us more about popular culture than they do about the equator. The monument and “Middle of the World City” were constructed on the spot where yesterday’s technology pointed to the equatorial divide. Because so much money and material was invested in the site, it continues to serve as the main tourist attraction. Its sheer size and the tourist industry infrastructure in place makes it “too big to fail” even though the line claimed to represent the equator is off by more than 200 meters.

When we travel down the road to the more accurate location we find ourselves immersed in a different kind of tourist spot. The scientific power of GPS technology led to a more precise demarcation of the equator, so one gets a more genuine feeling of really standing at the place where the hemispheres meet. But because the “real” middle of the world doesn’t have the same allure that the monument and entertainment venue offer at the original site, the more valid location has to depend on science tricks to attract attention (and tourist dollars).

You choose your deception: pretend that you are straddling the hemispheres when you are not, or pretend that the science being presented to validate a claim is real when it is not.